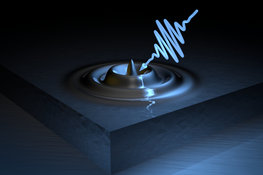 Figure: Ultrashort light flashes transform a semiconductor to a metal - in just 20 femtoseconds

The research group of Julia Stähler (Fritz Haber Institute and Humboldt-Universität zu Berlin) has found out that semiconductors can be converted to metals and back more easily and more quickly than previously thought. This discovery may increase the processing speed and simplify the design of many common technological devices.

Band bending at semiconductor surfaces induced by chemical doping or electric fields can create metallic surfaces with properties not found in the bulk, such as high electron mobility, magnetism or superconductivity. Optical generation of such metallic surfaces on ultrafast timescales would be appealing for high-speed electronics. It was demonstrated that the ultrafast generation of a metal at the (10-10) surface of ZnO upon photoexcitation. Compared to hitherto known ultrafast photoinduced semiconductor-to-metal transitions that occur in the bulk of inorganic semiconductors, the metallization of the ZnO surface is launched by 3–4 orders of magnitude lower photon fluxes. Using time- and angle-resolved photoelectron spectroscopy, it was shown that the phase transition is caused by photoinduced downward surface band bending due to photodepletion of donor-type deep surface defects. The discovered mechanism is in analogy to chemical doping of semiconductor surfaces and presents a general route for controlling surface-confined metallicity on ultrafast timescales.

Here’s a video summary and the full paper!