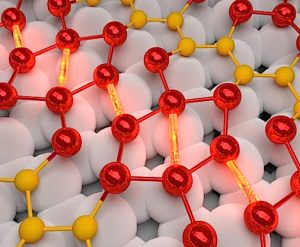 Watching the motions of atoms in the course of a chemical reaction is generally thought of as the Holy Grail for understanding chemical transformations or phase transitions in solids. While recordings of such “molecular movies” have been achieved in recent years, the atomic motion does not reveal the whole story of why specific bonds break and others form. This is dictated by the arrangement of the electrons as the atoms move along gradients on an energy landscape defined by the electrons. It is therefore necessary to observe the dynamics of the electronic structure, which means to record an “electron movie”, to obtain a complete picture of the mechanisms driving chemical reactions.

An experimental team at the Fritz-Haber-Institut in Berlin and computational scientists at the University of Paderborn now filmed the electrons during a light-induced reaction. They investigated a single layer of indium atoms on top of a silicon crystal. At low temperatures, the indium atoms form an insulating layer with the atoms arranged as hexagons. At room temperature, however, the indium atoms rearrange and form conducting atomic wires. This phase transition can not only be induced by changing the temperature but also by exciting the cold material with a very short flash of light. This light pulse puts energy in the electrons of the material faster than the atoms can move. Due to the extra energy, the electrons reorganize and change the energy landscape for the atoms: the atoms immediately start to move. In turn, the swift electrons react to the change in the atomic structure. This dynamic interplay between electrons and atoms has been recorded with time- and angle-resolved photoemission spectroscopy: a second ultrashort laser pulse is used to emit few of the electrons at different times after the phase transition was initiated by the first laser pulses. By repeating this process billions of time, a movie of the electronic structure during the phase transition of the indium nanowires was obtained. This information, combined with simulations of the electronic structure dynamics, made it possible to translate the electronic structure dynamics into a movie of the atomic energy landscape. This detailed reconstruction of the reaction pathway reveals not only the motion of atoms but also the formation and breaking of chemical bonds during the phase transition.

The approach demonstrated by Nicholson et al. is generally applicable to physical processes like structural phase transitions in solids as well as to chemical reactions, for instance of molecules. The theoretical framework for describing the electronic structure, however, differ significantly between these cases: while electrons in a crystal are described as bands in momentum space, electrons in molecules are depicted as bonds in real space. The work by Nicholson et al. provides a bridge between the languages of physics and chemistry for describing photo-induced reactions. Understanding how the transient electronic structure results in bond dynamics may in future allow the tailoring of chemical reactions and phase transitions via engineered light pulses.