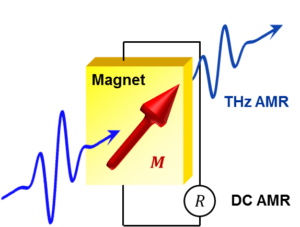 Electrical resistance of magnets with and without electron collisions

Electrical resistance R of metals arises from collisions of the conduction electrons with obstacles in the surrounding material and from the mass of the electrons. Interestingly, in a magnetic metal, R is larger when the current flows parallel to the magnetic moment M (see Figure (a), left), and it is smaller when the electrons flow perpendicular to it (Figure (b), left). This “anisotropic magnetoresistance” (AMR) is a mature effect, which is usually explained by the assumption that electrons moving parallel to M collide with obstacles more frequently than electrons flowing perpendicularly (see Figures (a,b), middle column).

However, this assumption was recently challenged by researchers from the Czech Republic and Germany, who are also associated with the Collaborative Research Center TRR227 “Ultrafast spin dynamics”. They showed experimentally that AMR can be strong even without electron collisions.

“Our trick was to use ultrashort electromagnetic pulses in the terahertz frequency range. They allowed us to measure AMR at rates both slower and faster than the average time between two collision events of conduction electrons”, explains Dr. Lukas Nadvornik, then member of the Terahertz Physics Group. “In this way, we were able to separate contributions that are unrelated to electron collisions from those that arise from collisions.” The team found that AMR unrelated to collisions emerges because the electrons moving along the magnetization direction are effectively heavier than electrons moving perpendicular to it (see Figures (a,b), right column).

AMR is an important probe of the magnetic state of prototypical ferromagnetic and antiferromagnetic spintronic devices, which convey and store information using the magnetic moment of the electron rather than its charge. Lukas Nadvornik concludes: “Our findings show that collision-unrelated AMR has a large information bandwidth and, thus, is highly interesting for future ultrafast spintronic applications.”