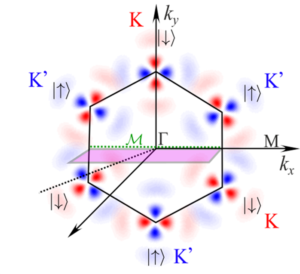 Angle-resolved photoemission spectroscopy (ARPES) is the most direct technique to probe the electronic structure of crystalline solids. While ARPES is typically used to map the bands’ dispersion, increasing the dimensionality of the measurements, and thus of the observables, have been shown to provide more subtle information about the electronic wavefunction of solids. In this joint experimental and theoretical work (in collaboration with J. Braun, H. Ebert, K. Hricovini, J. Minar and M. Schüler), we introduce a new observable in ARPES, Time-Reversal Dichroism in Photoelectron Angular Distributions (TRDAD). This novel observable quantifies the modulation of the photoemission intensity upon azimuthal crystal rotation which mimics a time-reversal operation. We demonstrate that this observable allows accessing the hidden orbital pseudospin texture in bulk 2H-WSe2.