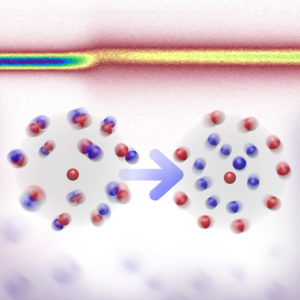 Time-resolved soft-x-ray photoemission spectroscopy is used to simultaneously measure the ultrafast dynamics of core-level spectral functions and excited states upon excitation of excitons in WSe2. We present a many-body approximation for the Green’s function, which excellently describes the transient core-hole spectral function. The relative dynamics of excited-state signal and core levels clearly show a delayed core-hole renormalization due to screening by excited quasifree carriers resulting from an excitonic Mott transition. These findings establish time-resolved core-level photoelectron spectroscopy as a sensitive probe of subtle electronic many-body interactions and ultrafast electronic phase transitions.
A team of researchers around scientists at the Physical Chemistry Department of the Fritz Haber Institute has found a new method of observing the electron-hole-pairs, called excitons, that are key for the function of photovoltaic cells. They managed to film them using the free-electron laser FLASH at the Deutsches Elektronen-Synchrotron (DESY) in Hamburg.
In the world of sustainable energy, solar cells have gained a lot of importance in the last few years. In 2019, 9% of Germany’s net electricity supply came from solar energy. That may seem relatively low, but it’s actually huge compared to ten years ago. Solar energy is one of the fastest growing energy sectors.
One of the reasons for this success story is the large amount of research on the inner workings of photovoltaic cells. Many of the insights in this field initially come from fundamental science as is undertaken at the Physical Chemistry Department of the Fritz Haber Institute. There, a team around Ralph Ernstorfer has just found a way of imaging a key element of all optoelectronic applications: the formation and movement of excitons.
“An exciton describes an electron and the hole it leaves behind when it moves from its original place,” explains Ernstorfer. Excitons are important in the process of producing electricity in solar panels. At the core of a photovoltaic cell, or what is more commonly called a solar panel, is a semiconductor (silicon for example) that on one side has many loose electrons and on the other more atoms with holes. Electricity is generated when a current runs between them, i.e. when the electrons move to fill the holes. But that process would be over in a few seconds without a new supply of electrons and holes. “The sunlight that shines on the photovoltaic cell prompts the creation of new excitons by lifting electrons to a new energy level,” says Ernstorfer, “where they leave a vacancy in their original states. That guarantees a constant supply of electrons and holes, thus enabling an electric current.”
While this principle has been known for decades, physics research has been a little slow in measuring how exactly this happens. An international collaboration of researchers around a team from the Fritz Haber Institute in Berlin now conceived a new approach for observing the generation of excitons in real time. “We wanted to know how excitons either broke up or how they formed from independent particles”, says Maciej Dendzik, lead author of the study. Using the free-electron laser FLASH at the Deutsches Elektronen-Synchrotron (DESY) in Hamburg, they emitted light on to a semiconductor (tungsten diselenide – WSe2) and took billions of snapshots of the electrons’ arrangement in the material. “We essentially made a movie of the semiconductor’s electronic structure during and after light absorption,” adds Dendzik excitedly.
Distinguishing of excitons from quasi-free particles is not an easy task. The researchers took an unconventional approach to this problem by monitoring not only the excited states population, but also strongly bound electrons from the atomic core at the same time. The latter turned out to be essential for seeing the exciton breaking dynamics due to subtle changes in interaction strength as this process unfolds. This experiment resulted in development of a novel model describing how core electrons feel the presence of excitons, which paves the way for exciting new research in the field of semiconductor physics and, ultimately, the design of more efficient solar cells.