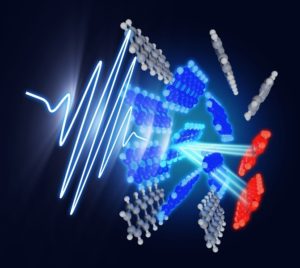 Figure: © Jörg Harms, MPSD. In the singlet exciton fission process, a singlet exciton (blue) is created upon absorbing light and then splits into two triplets (red) on ultrafast timescales. We have investigated the structural dynamics accompanying this process.

Singlet exciton fission (SEF) is a process occurring in several organic semiconductors by which an electronically excited singlet exciton spontaneously splits into two triplet excitons. The SEF properties, such as yields and rates, depend crucially on the molecular structure and intermolecular interactions. This calls for an experimental technique that can probe the structural changes accompanying the SEF process at the relevant time and length scales.

In a study published in Science Advances, we have performed femtosecond electron diffraction experiments to directly reveal the structural dynamics accompanying the SEF process in pentacene single crystals. We have observed coherent atomic motions at 1 THz, incoherent motions, and an anisotropic lattice distortion representing the polaronic character of the triplet excitons. By combining real-time time–dependent density-functional theory, molecular dynamics simulations and experimental structure factor analysis, we have identified the coherent motions as collective motions of the pentacene molecules along their long axis. The theory analysis has shown that these motions can only be triggered through the coupling of electronic excitations to other more localized molecular motions, which in turn, couple to the sliding motions also observed in the experiments. These long-range intermolecular motions heavily modify the excitonic coupling between adjacent molecules. In doing so, they efficiently neutralize the forces that keep the two triplet excitons together right after they have been generated, providing a possible explanation about the origin of the ultrafast timescales related to the fission.