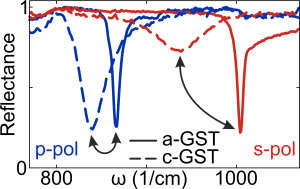 Phase-Change materials such as the Ge3Sb2Te6 compound (GST) can be reversibly switched between the amorphous and crystalline crystal phases by ultrashort laser pulses. At infrared wavelengths, the two phases of GST exhibit a large permittivity contrast, which can be used to control the dielectric background sensed by guided optical modes that propagate in close proximity.
In their work, the authors demonstrate experimentally and theoretically that a thin GST film on a polaritonic substrate (SiC) serves as an actively tunable material [more...]

Atomic scale heterostructures offer unique possibilities for new material properties that emerge from the chemical bonding at the material interfaces rather than from the bulk. Often this idea is brought forward using two-dimensional van-der-Waals bonded crystals. In contrast here, researches show that the same concept can also be applied to traditional semiconductors with atomic-level control over the individual few-monolayer-thick sheets using epitaxial methods. The enhanced interlayer bonding strength [more...]