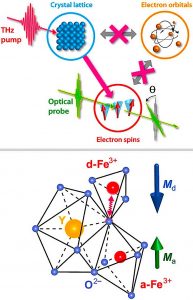 Heating a ferromagnet beyond some critical temperature leads to loss of magnetic properties. The precise mechanism and time-scale of the process remained undescribed. A team of scientists from Berlin (Fritz Haber Inst., FU Physics Dept., TU Inst. for Optics & Atomic Physics, Max Born Inst.), Dresden (Helmholtz Center), Uppsala (Dept. of Physics and Astronomy), St. Petersburg (Ioffe Inst.), and Sendai, Japan (inst. of Materials Research) have now revealed the elementary steps of this process
The researchers have directly probed the flow of energy and angular momentum in the model insulating ferrimagnet yttrium iron garnet. After ultrafast resonant lattice excitation, one could observe that magnetic order reduces on distinct time scales of 1 ps and 100 ns. Temperature-dependent measurements, a spin-coupling analysis, and simulations show that the two dynamics directly reflect two stages of spin-lattice equilibration. On the 1-ps scale, spins and phonons reach quasi-equilibrium in terms of energy through phonon-induced modulation of the exchange interaction. This mechanism leads to identical demagnetization of the ferrimagnet’s two spin sublattices and to a ferrimagnetic state of increased temperature yet unchanged total magnetization. Finally, on the much slower, 100-ns scale, These findings are relevant for all insulating ferrimagnets and indicate that spin manipulation by phonons, including the spin Seebeck effect, can be extended to anti-ferromagnets and into the terahertz frequency range.