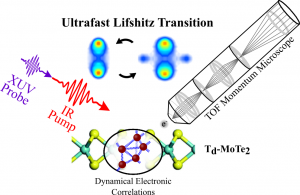 In crystalline solids, electrons fill quantum-mechanically allowed states from the lowest possible energy upwards, a consequence of the Pauli exclusion principle. The energy of the highest occupied state is known as the Fermi energy. Because electrons within solids have well-defined three-dimensional momenta, one can plot components of these momenta against each other, for electron lying at the Fermi energy, leading to characteristic and often beautiful shape, bounded by a so-called Fermi surface.

The Fermi surface is “the stage where the drama of the life of the electron is played out,” wrote famous physicists Lifshitz and Kaganov, in 1980. Indeed, the shape of the Fermi surface governs most of the properties of metals and strongly correlated many-body systems. Equilibrium tuning of macroscopic parameters such as temperature, pressure, strain or doping has recently been established as robust tools to modify the Fermi surface topology, a phenomenon known as Lifshitz transition.

Here (https://arxiv.org/abs/2003.04059) we have reported a novel class of Lifshitz transition, which allows us to switch the topological properties of the Fermi surface on unprecedented (femtosecond) timescale. This discovery was enabled through our recent development of four-dimensional photoemission spectroscopy: we directly measure the ultrafast evolution of the Fermi surface and the entire electronic band structure of Td-MoTe2, a type-II Weyl semimetal, following laser excitation. Moreover, through a collaboration with N. Tancogne-Dejean, M.A. Sentef and A. Rubio (MPSD Hamburg), we investigated the microscopic origin underlying this ultrafast electronic topological transition by performing cutting-edge self-consistent time-dependent density functional theory plus Hubbard U (TDDFT+U). These calculations clearly indicate that the ultrafast modification of the electronic correlations is the dominant mechanism allowing to transiently drive the correlated material across the Lifshitz transition.

This route toward the non-equilibrium modification of topological properties of matter is fully general and could be applied to any strongly correlated materials being in the vicinity of a Lifshitz transition.