New website released!
May 2019
Our website was migrated to the new server and a new design.
Highlight: Ultrafast Dynamics of Atomic Motion Viewed by the Electrons in Solids
Nov 2018 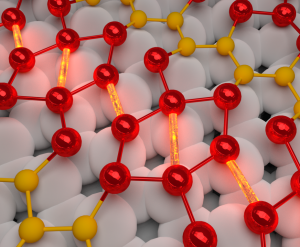 Capturing the motions of atoms in a so-called “molecular movie” is generally thought of as the Holy Grail for understanding chemical transformations or structural phase transitions in solids. However, atomic motion is not the whole story, as the forces driving these motions arise from details of the electronic structure and a gradient across a free energy landscape. Therefore, to obtain a complete picture of the processes driving structural changes, it is necessary to observe the dynamics of the electronic structure and track the temporal evolution of electronic states and their populations. By using femtosecond lasers to perform time- and angle-resolved photoemission spectroscopy, the changes of the electronic structure during the phase transition in indium nanowires on a silicon surface could be closely monitored, allowing a detailed reaction pathway to be extracted. This information combined with simulations of the electronic [more...]
New paper published: Ultrafast spin density wave transition in Chromium governed by thermalized electron gas
Dec 2016 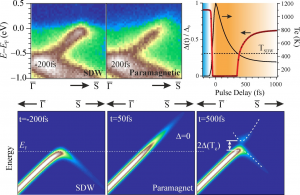 Time-resolved ARPES allows direct access to the electronic signatures of broken symmetry phases, as well as their femtosecond dynamics. By measuring the spin density wave (SDW) transition in thin films of Cr, we study the dynamics of a phase transition in which the role of the lattice is minimized, in contrast to conventional charge density wave or superconducting materials. This allows for a more stringent test of the role played by the electronic temperature in driving materials from one phase to another under non-equilibrium conditions. By comparison with a mean field model we are able to quantitatively extract the evolution of the SDW order parameter through the ultrafast phase transition, and show that it is governed by the transient temperature of the thermalized electron gas. This shows that for phases governed by the temperature of a single sub-system (e.g. electronic, phononic) concepts from thermodynamic equilibrium are still applicable. [more...]
New paper published: Itinerant and Localized Magnetization Dynamics in Antiferromagnetic Ho
Jun 2016

The exchange interaction between different magnetic moments is the dominating force determining spin ordering in magnetic materials. In particular the interplay of itinerant d-electron and localized f-electron magnetic moments in 4f metals and their alloys opens up new routes to control their magnetic behavior on ultrafast timescales. Here we use femtosecond time-resolved resonant magnetic x-ray diffraction at the Ho L3 absorption edge to investigate the demagnetization dynamics in antiferromagnetically ordered metallic Ho after femtosecond optical excitation. By tuning the x-ray energy to the electric dipole (E1) or quadrupole (E2) transition we investigated selectively and independently the spin dynamics of the itinerant 5d and localized 4f electronic subsystems. The simultaneous demagnetization of both subsystems demonstrates strong intra-atomic 4f-5d exchange coupling. The demagnetization time scales which [more...]
« Previous 1 … 3 4 5
Imprint - Privacy Policy