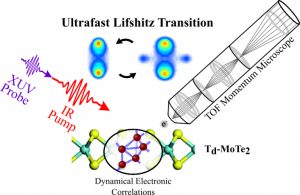 In crystalline solids, electrons fill quantum-mechanically allowed states from the lowest possible energy upwards, a consequence of the Pauli exclusion principle. The energy of the highest occupied state is known as the Fermi energy. Because electrons within solids have well-defined three-dimensional momenta, one can plot components of these momenta against each other, for electron lying at the Fermi energy, leading to characteristic and often beautiful shape, bounded by a so-called Fermi surface.
The Fermi surface is “the stage where the drama of the life of the electron is played out,” wrote famous physicists Lifshitz and Kaganov, in 1980. Indeed, the shape of the Fermi surface governs most of the properties of metals and strongly correlated many-body systems. Equilibrium tuning of macroscopic parameters such as temperature, pressure, strain or doping has recently been established as robust tools to modify the Fermi surface [more...]
Covid-19
Mar 2020
Due to the worldwide corona-pandemic, wer are currently working in home office. The best way to reach us is via email.
We wish everybody to stay healthy and get through this difficult time!
Deterministic control of an antiferromagnetic spin arrangement using ultrafast optical excitation
Feb 2020
A central prospect of antiferromagnetic spintronics is to exploit magnetic properties that are unavailable with ferromagnets. However, this poses the challenge of accessing such properties for readout and control. To this end, light-induced manipulation of the transient ground state, e.g. by changing the magnetic anisotropy potential, opens promising pathways towards ultrafast deterministic control of antiferromagnetism. Here, we use this approach to trigger a coherent rotation of the entire long-range antiferromagnetic spin arrangement about a crystalline axis in GdRh2Si2 and demonstrate deterministic control of this rotation upon ultrafast optical excitation. Our observations can be explained by a displacive excitation of the Gd spins′ local anisotropy potential by the optical excitation, allowing for a full description of this transient magnetic anisotropy potential.
New group member: Caio Silva
Jan 2020 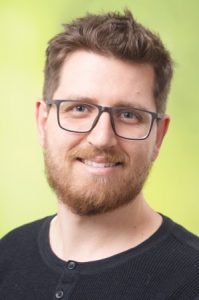 We are happy to welcome our new Postdoc Caio Silva to the group!
First time- and momentum-resolved photoemission studies using time-of-flight momentum microscopy at a free-electron laser.
Jan 2020 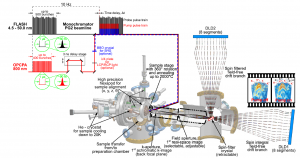