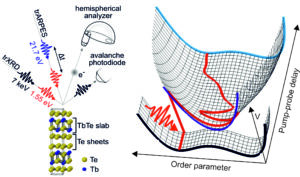 Phase transitions under quasi-equilibrium conditions, e.g., induced by a slow variation of temperature, are well described by Landau theory. In contrast, the situation far from equilibrium, e.g., after ultrafast laser excitation, differs fundamentally from a thermodynamic scenario, and it remains an open question how our understanding of static phase transitions in complex matter has to be adapted to capture a dynamical, photoinduced melting and recovery of order. In particular, even the thermal critical temperature might not provide a valid description in a system exhibiting strong non-equilibrium between different degrees of freedom, such as electrons and lattice.

In our study which was published in Nature Communications, we investigate an ultrafast charge-density-wave-to-metal transition after optical excitation by combining state-of-the-art time-resolved electronic and structural probes. By tracking the electronic and lattice dynamics of the charge density wave (CDW) and the transient electronic temperature throughout the full melting and recovery cycle, we reveal a surprising formation and stability of CDW order at electronic temperatures far greater than the thermal transition temperature, which we link to transiently suppressed lattice fluctuations in the nonthermal scenario of hot electrons coupled to an initially cold lattice. Additionally, we map the collective CDW amplitude excitations in unprecedented detail, which allows us to reconstruct the underlying transient potential energy surfaces using a time-dependent Ginzburg-Landau approach.