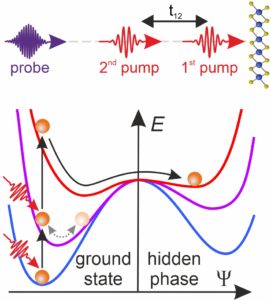 Active control over macroscopic properties of solids is highly desirable for a broad range of applications. A promising pathway to on-demand material properties are metastable hidden states, which are nonequilibrium phases that can only be reached after a quench by ultrashort optical or electrical pulses. As hidden states often host new emergent properties and can be switched on ultrafast timescales through non-thermal reaction pathways, they offer exciting novel functionalities for solid-state quantum devices. Yet, the fundamental processes that govern the dynamical pathway to hidden phases remain a largely open subject. Thus, switching is mostly based on empirical protocols, resulting in low efficiencies and limited control over stability.

In our recent study (arXiv link), we investigate the dynamical pathway to the metastable hidden quantum state of 1T-TaS2 after optical excitation and reveal the critical role of a structural coherence governing the transition. Using time- and angle-resolved photoemission spectroscopy (trARPES), we investigate the electronic states during the transition from the insulating polaronic ground state of TaS2 to the metallic hidden phase. Employing a multi-pulse optical excitation scheme, we demonstrate a high degree of coherent control over the switching process to the hidden phase, providing strong evidence for the key role of the collective amplitude mode as the driver of the transition.